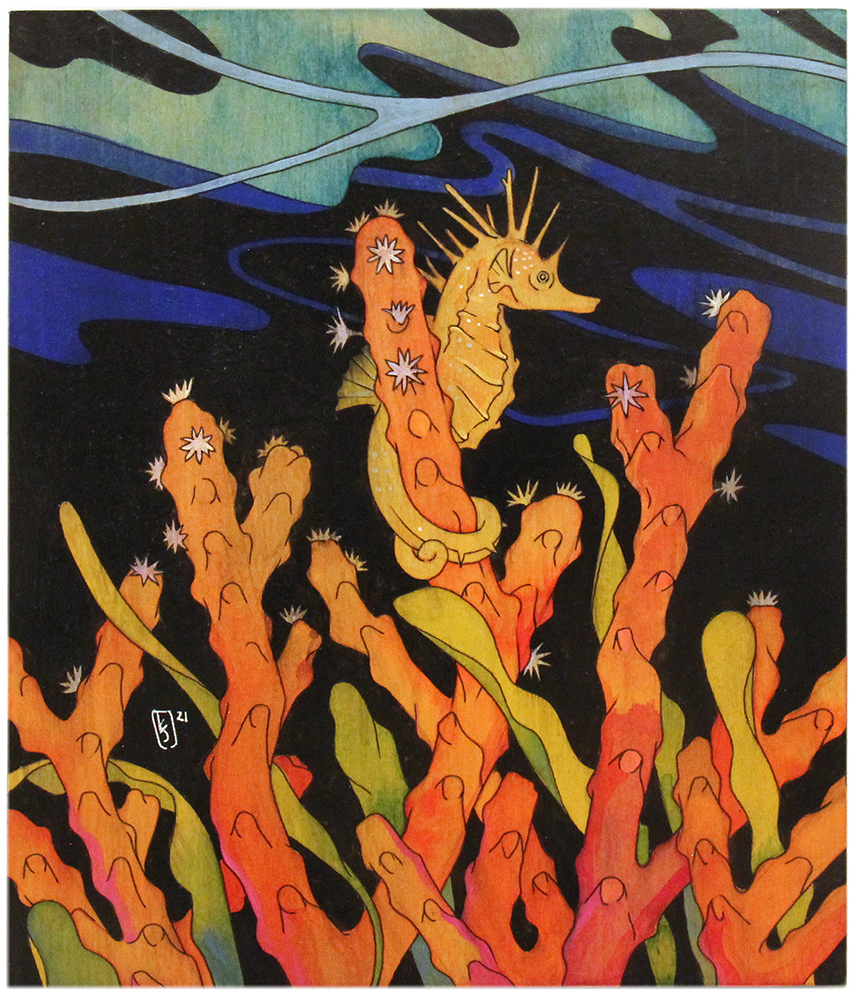 < previous
SHOW ALL
next >
In Gorgonia

The longsnout seahorse is native to the tropical and warm temperate areas of the western Atlantic Ocean and is one of the largest seahorses in the area, reaching sizes of up to 7 inches (18 cm). Color is quite variable (yellow, white, brown, etc.), but a distinguishing characteristic in this species is its covering with small, dark spots.

Longsnout seahorses are very poor swimmers and rely on camouflage and bony plates that cover most of their bodies to avoid predation. Like other seahorses, the longsnout seahorse’s tail is highly maneuverable, and it uses this tail to attach itself to seagrasses, mangrove roots, sponges, soft corals, or other places where it hides. Longsnout seahorses eat tiny plankton but are small enough and have sufficient vision to see and attack individual prey (unlike large filter feeders). Their heads are relatively large compared to their very small mouths, so they are able to concentrate enough pressure at their mouths to easily suck in their prey.

Like all seahorses, longsnout seahorses have an interesting reproductive strategy. Females lay their eggs into specialized pouches on the males’ abdomens, and the males incubate them until they hatch. Furthermore, scientists believe that some seahorses have monogamous relationships and form pairs that stay together for several mating seasons in a row.

Scientists do not currently have sufficient data to determine population trends for the longsnout seahorse, but most species of seahorses are vulnerable to overfishing. They are easy to capture and are dried out to be sold to tourists or shipped to some Asian countries where they are used in traditional medicine. They are also popular aquarium species. It is important for scientists to continue to study the longsnout seahorse in order to determine whether or not its populations are stable and what conservations measures might need to be initiated.

Corallium rubrum (commonly referred to as red coral)is endemic to the Mediterranean and adjacent African Atlantic waters. This species has been harvested since ancient times and is possibly the one in the worst condition. Up to 2,000 vessels have been dedicated to harvesting this coral using such destructive techniques like the crowbar (barra Italiana) or double cross (cruz de San Andrés). In Italy, the main exploiter of this resource, 66% of the colonies are not reproductive, and in extensive areas in Spain, 86% of the colonies do not reach legal exploitation size and 91% are barely 5 centimetres in height.


Your purchase of this piece contributes 20% to Oceana's ongoing efforts to preserve the habitats of sea life like the ones shown here. Learn more at Oceana.org.