The Art of the Motion Picture: "Sherlock Holmes" by John Watkiss 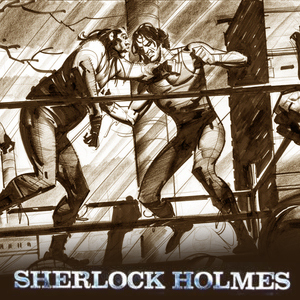 We are honored to again be featuring the dynamic and imaginative work of development artist John Watkiss.  It isn't any wonder why Watkiss has been asked to lend his talent to film projects such as Disney's Tarzan, Atlantis, and Treasure Planet, as well as storyboarding the entirety of Sky Captain and the World of Tomorrow.  His striking line work is unmistakable.  Extraordinary vantage points pull the viewer into the action taking place.  Acclaimed for his work with Neil Gaiman's Sandman series as well as the popular Deadman.  Watkiss' "The Boxer" sold at Christie's auction house in 2001.
We are presenting Watkiss' vision of the upcoming film Sherlock Holmes in theatres Christmas Day.  The film's producer, Lionel Wigram, commissioned Watkiss to complete a set of pitch illustrations and credits the resulting work as the leverage needed to convince Warner Bros of the project.  View these amazing, large-scale illustrations opening December 12 in our upstairs Atrium gallery.