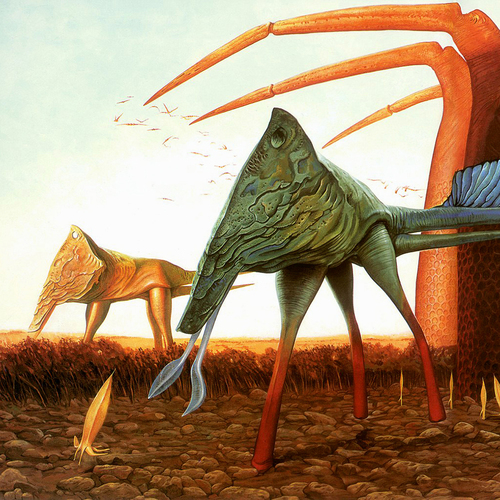 ABOUT WAYNE BARLOWE
is an American science fiction and fantasy writer, painter, and concept artist. Barlowe's work focuses on esoteric landscapes and creatures such as citizens of hell and alien worlds.[1] He has painted over 300 book and magazine covers and illustrations for many major book publishers, as well as Life magazine, Time magazine, and Newsweek.[2] His 1979 book Barlowe’s Guide to Extraterrestrials was nominated in 1980 for the Hugo Award for Best Related Non-Fiction Book, the first year that award category was awarded.[3] It also won the 1980 Locus Award for Best Art or Illustrated Book. His 1991 speculative evolution book Expedition was nominated for the 1991 Chesley Award for Artistic Achievement.[4]

Barlowe has worked as a concept artist for movies such as Galaxy Quest (1999), Avatar (2009), and Aquaman (2018), among others. He is known to work closely with Guillermo Del Toro, serving as a creature designer for the Hellboy film series and the head creature designer for Pacific Rim (2013).[2] His work on Hellboy (2004) awarding him a nomination for the 2005 Chesley Award for Product Illustration.[4] Barlowe was the creator and executive producer of Alien Planet, a documentary adaptation of Expedition produced by Discovery Channel in 2005.[5] He has written two fantasy novels: God’s Demon (Tor Books, 2007)[6] and its sequel The Heart of Hell (2019).


ABOUT ARTPAGE
ArtPage is a global computer graphics art (CG) platform with a special focus on content incubation. In 2006, it established leewiART, a community of elite Chinese CG artists. Since then ArtPage has successfully launched numerous international art projects, including the "Share One Planet" CG Art Elite Invitational Competition with the participation of more than 300 artists from all over the world.

With more than ten years of close cooperation with global CG artists, ArtPage has developed an expert perspective in discovering worthy artworks and a unique system of content incubation; we will work consistently to integrate global publishing，art，exhibition，art toys，films，televisions，games and other commercial resources. So far we have presented a wide range of cooperation channels and successfully incubated many outstanding brands such as Re-Child，Psychopomp，Ghost，The Faramita of Galaxy，BloodySun and many more.