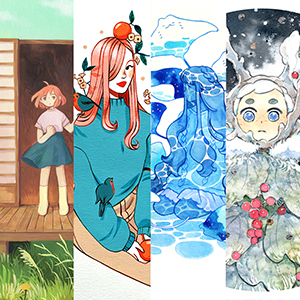 view photos
Gallery Nucleus is proud to announce the return of these spellbinding artists! This magical group show is filled with entirely new work from Heikala, Meyoco, Sibylline Meynet, and Ruka Ito.

Heikala - Heikala is a Finnish illustrator who uses the traditional mediums of ink and watercolour to tell stories and bridge the divide between mundane and magical.

Meyoco -  Meyoco is an illustrator based in Southeast Asia, whose art is both beautiful and nostalgic, with nuances of circa 1990 Sailor Moon, florals, waves, and vibrant colors. Her work is mostly inspired by Japanese comics and is influenced by western animation, and pop culture.

Sibylline Meynet - Sibylline Meynet is an illustrator based in Paris, France. She has worked for Hachette Pratique, Boom! Studios, Valiant and L'Epopee Temporelle. When not working on comics and commissions, Sibylline likes to draw women in a peaceful environments, surrounded by stars, flowers and clouds.

Ruka Ito - Ruka is an artist based in Japan that has worked in manga and animation, and is currently working on a secret project with Cartoon Network. She loves drawing magical elements and the beauty of nature.