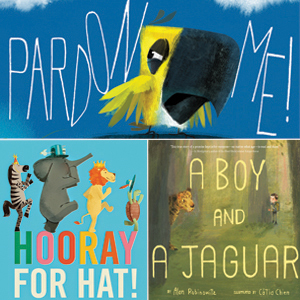 Join us as we celebrate the release of three upcoming children's books from three of our favorite artists, Catia Chien's new book, "A Boy and a Jaguar", Brian Won's "Hooray for Hat!", and Daniel Miyares' "Pardon Me!" with a book launch party, including a signing, reading, and exhibit of art from the books!

A BOY AND A JAGUAR:

Alan loves animals, but the great cat house at the Bronx Zoo makes him sad. Why are they all alone in empty cages? Are they being punished? More than anything, he wants to be their champion—their voice—but he stutters uncontrollably.

Except when he talks to animals…

Then he is fluent.

Follow the life of the man Time Magazine calls, "the Indiana Jones of wildlife conservation" as he searches for his voice and fulfills a promise to speak for animals, and people, who cannot speak for themselves. This real-life story with tender illustrations by Catia Chien explores truths not defined by the spoken word.

Elephant wakes up grumpy—until ding, dong! What’s in the surprise box at the front door? A hat! HOORAY FOR HAT! Elephant marches off to show Zebra, but Zebra is having a grumpy day, too—until Elephant shares his new hat and cheers up his friend. Off they march to show Turtle! The parade continues as every animal brightens the day of a grumpy friend. An irresistible celebration of friendship, sharing, and fabulous hats.

A little bird just wants some peace and quiet—but he’s about to get a whole lot more than he bargained for in this clever picture book debut, in the tradition of Jon Klassen’s
I Want My Hat Back.

It’s a beautiful, sunny day in the swamp when a little yellow bird settles down on a rock—only to be interrupted as first a heron, then a frog, then a turtle ask to sit on the rock with him. As each animal says “pardon me,” the little bird’s replies get grumpier:

“I suppose I can’t stop you.”
“It’s already crowded, don’t you think?”
“Sure, the entire swamp’s here already. Why shouldn’t you be, too?”

When a fox comes by, the bird finally loses his cool. But it just so happens that fox showed up for a reason, and the little bird’s outburst leads to a surprise ending you’ll want to read again and again.

CATIA CHIEN was born and raised in Sao Paulo, Brazil surrounded by eccentric animals and tropical fruits. She graduated from Art Center College of Design in Pasadena, CA, with honors in 2004. Today, she is happily working as a full time illustrator for children's books in NYC at an art studio with a view of the East River and an old pencil factory. Her clients include Random House, Candlewick, Panda Press, Penguin and Houghton Mifflin Harcourt. Her children's book titles include Sea Serpent and Me, which won a gold medal at the Society of Illustrators LA and The Longest Night.  She is thrilled for this opportunity to illustrate Dr. Alan Rabinowitz's story in A Boy and a Jaguar, a children's book that encourages kids to look within and find their own voice.

DANIEL MIYARES is an author and illustrator of stories for young readers.  He grew up in the foothills of South Carolina before studying at Ringling College of Art and Design. After graduating with a BFA in illustration he headed west to Kansas City where he now lives with his wife and their two children.  For the past ten years he has collaborated with a number of clients including Hallmark Cards, Inc., Simon and Schuster, Charlesbridge Publishing, Imagine Books, National Geographic, Spider Magazine, Ladybug Magazine, and the Kansas City Star.  Daniel has illustrated the books Waking Up Is Hard to Do and Bambino and Mr. Twain. Pardon Me! is his first book as author/illustrator.


Free Admission. Outside books will be subject to a $10 fee.