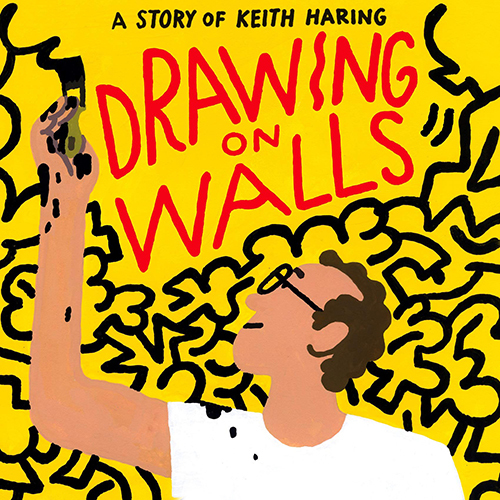 ** Please note: attendance for the opening of this event is by appointment only. Please email gallery@gallerynucleus.com to make your viewing appointment. Limited spots available. **

Keith Haring has been a pop art icon since the 1980s when his work transcended graffiti and into social activism. This new picture book introduces kids and adults to this prolific artist and tells the story of Keith's work.

About Josh Cochran
Josh Cochran grew up in Taiwan and California. He works as an illustrator based in Brooklyn specializing in bright, dense and conceptual drawings. In 2013, his work on Ben Kweller's "Go Fly A Kite" received a Grammy nomination for Best Limited Edition Packaging. He has a number of side projects, and sometimes exhibits his work in galleries. Josh has a children's book published by Big Picture Press, "Inside Out: New York".

About Drawing on Walls
"Burgess describes Haring discovering Robert Henri's The Art Spirit in college ("He felt as if the book was speaking directly to him"), encountering the large paintings of Pierre Alechinsky (he was "blown away"), and recognizing a common impulse in dancers at the West Village's Paradise Garage ("For Keith, drawing and painting were like dancing. He called it 'mind-to-hand flow'"). Cochran uses a thick black line to suggest Haring's creations, and renders figures in a Haring-esque style without seeming gimmicky. Of interest to young readers are Haring's frequent efforts to involve children in mural-making projects. The story, including a respectful acknowledgement of Haring's death from AIDS, makes the subject seem immediate and real--and presents a compelling vision of answering the call to create." --Starred Review, Publishers Weekly