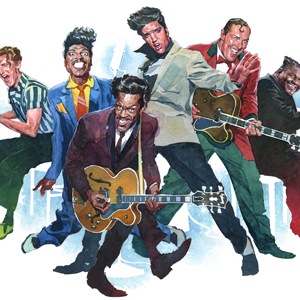 Rock and roll has influenced generations of the world's music-inclined youth, from its rockabilly and Doo-wop roots in the 1950's to the emergence of surf music, Motown and heavy metal in the 1960's. Icons of rock and roll—such as Elvis Presley, Buddy Holly and the euphoric Beatles—made way for newer names including The Beach Boys, Led Zeppelin and the late Jimi Hendrix.

The frenzied genre would evolve during the 1970's, spurring punk rock archetypes like The Ramones, Sex Pistols and The Clash. Rock and roll's next three decades would see rise to even more sub-genres and historic acts like U2, Guns & Roses and Pearl Jam. To say that rock and roll is a global phenomenon would be a true understatement!

Nucleus presents an international roster of creative talent, bringing the wild history of rock and roll's worldwide influence into our gallery space. The exhibition will feature artwork from a variety of artists reflecting upon rock and roll's richly exciting timeline, so rock enthusiasts will want to mark their calendars!

Join Us for Opening Night! ($5 Admission)
Open to the public, No RSVP
Admission includes free raffle ticket
Wear a ROCK T-SHIRT to be entered to win a glow-in-the-dark limited edition silkscreen of Michael Jackson by James Jirat Patradoon*

On OPENING NIGHT, exhibiting artist Andrew Robinson will be signing copies of his new book, The Fifth Beatle: The Brian Epstein Story.

Purchase the book and be entered to win original artwork (pictured below).*  Learn more about the book here!