Dig Me Out Group Show 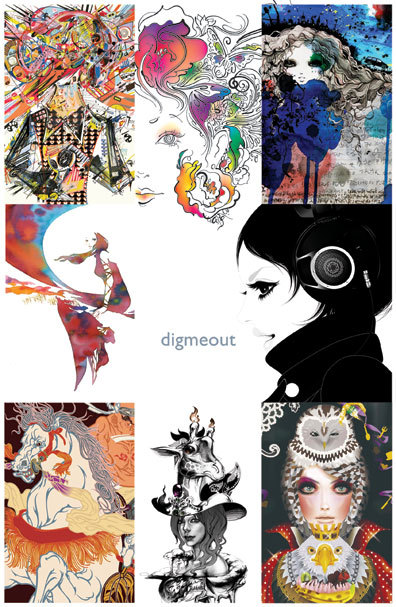 view photos
Starting January 13, 2007 Nucleus will be featuring new and originals works by 14 internationally commendable artists located around Osaka, Japan. Represented by the artists agency "digmeout", Their works are intricately alive and evocative.


Often rich with fine detail, sensitivity and vivid colors, the work ranges from fine art, fashion, to luscious Japanese pop. All of it intrinsically enticing, and "eyewatering", attributes which we have come to expect from contemporary Japanese art. DigMeOut has selected some of the freshest talents to represent their group in Osaka and provided us with nothing less to create one of the more alluring exhibitions to hit the LA/Hollywood artscene.

History:
They have participated in various international charity events along with creating illustrations for Nissan, Mac Power, Elle Japon, banks and various types of graphical motifs. Dig Me Out is an art project lead by Osaka's radio station "FM802." It's purpose is to "dig out" new and promising artists to design stickers, and posters. Beginning in 2004, digmeout started collaborations and art shows overseas, making digmeout internationally known. Many digmeout artists are now enjoying this coverage. Come visit Nucleus as we host this memorable event.

Chitose Yogi - Born 1970 in Shiga, she graduated from kyoto City Art Collage and taught art classes at a public high school in Shiga. Since 2001, she has became a freelance illustrator. Her theme is "the gentle air" using flowers and girls as a motif, they are composed from an authentic technique since Edo Period, Tarashikomi.

Kazuko Taniguchi - Born in 1981, lives in Okayama. Started working as an illustrator while she was in college. Worked mostly in Okayama area, she did everything from magazine illustration, CD album cover, flyer to postcard designs. She likes to draw cute and slim girl dressed in traditional Japanese Kimono clothes as well as anything shiny or floral. Her well detailed illustration are highly original, and stands out amongst many "cute" illustrations.

Momoyon - Born in 1984, lives in Kobe. Continues to draw laid back and joyful paintings using thick acrylic paints. Wants to make art work that captures one's heart rather than making something that's "good". Though not strong in it's techniques, her confident lines and colors helps to show us her urge to express.

Nekoshowgun - Born in 1982 and lives in Wakayama. Influenced by M.C.ESCHER and Salvador Dali, she started to draw. Passed FM802 art audition in 2004 and exhibited at a group show in digmeout CAFE. She is known for his precise technique and unique character design. Her work portfolio includes video game movie for Konami, album cover design for "ROCK CITY PRESENTS COOL DANCE", and restaurant mural.

Takeshi Nitta - Born 1978 in Saitama. Graduated from Kyushu Sangyo University. A freelance illustrator who entered the FM802 Art Audition in 2002 and participated in FUNKY802BSTREET ART EXHIBITION#7 in 2002. He uses Macintosh Computers, color inks and pens. He presently lives in Kyoto.

Kazuya Taoka - Born in Kagawa 1983. Graduated from Art Department at Osaka Art University in 2005. He creates collage of scenes from several different moments and places. He puts each scene impressed itself on his memory together on one canvas,which is like keeping a diary.

Hajime Yoshio - Born in 1982, lives in Nara. Graduated Kyoto Creative Design College, where he provided illustrations for school's flyers and postcards. His illustrations focuses on fashionable female figures with playful eyes. His characters with well researched hair style and costume are sure to create hype instantly.

ZAnPon - Born 1981 in Osaka. Entered Osaka University of Arts in 2000 and started drawing in January of 2004. His style of line drawing goes beyond our imagination and explores freely from abstract art to concrete art, from life drawing to animal drawing.It surpasses any of current art genre and gave birth to his own genre.

Yugo Fujita - Born in 1985, lives in Osaka. Works part time. Did solo and group shows in Nara area from 2003. In November of 2004, he was Involved in "AMUSE ART JAM 2004 in Kyoto" Using markers and colored pencil, he draws his rockn'roll icons mixed with Beatles' lyrics such as "I'll follow the sun" and " I saw her standing there" in the background. His artworks are highly influenced by fashionable and laid back style of 60-70's , and it's hard to believe that this was done by 19 years old teenager.

Tomoko Saeki - She organized a design unit, KaSa in 2000, producing and distributing original products while exhibiting in Kyoto. She became solo artist since 2002, creating paper slide show for a special exhibition at Osaka Mari Time Museum, as well as stage art for Reset, a play of theater group, TRENDKLILL.
She entered FM802 Art Audition in 2003 and participated in the FUNKY802 STREET ART EXHIBITION #8.

Teriyaki Tagashira - He entered the FM802 Art Audition in 1997 and participated in the FUNKY802 STREET ART EXHIBITION #3. He creates original 'Teriyaki characters' such as Oyorokobi-kozo, Mukademan, and Rokute-kozo. His designs range from shop shutters to matchboxs, and even sometimes friends' wishes. His colorful Japanesque taste is very unique and original.