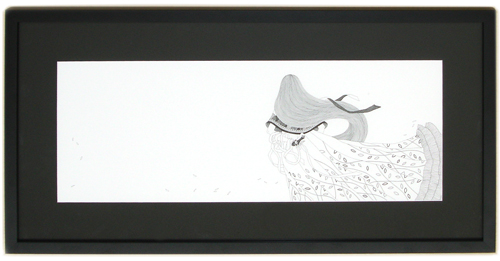 The book THE RED SHOES is available online here
Learn More about THE RED SHOES Artist Panel featuring artist Sun Young Yoo here
Artist Bio:
Sun Young Yoo graduated Art Center College of Design (ACCD) in Pasadena, California, in the year of 2007 as an Illustration major. Right after graduating, she worked on a book project with AMMO books about a year, and her first book, The Red Shoes was released in November 2008. This book was created after evaluating, interpreting, and sharing thoughts on the story, The Red Shoes, originally written by Hans Christian Andersen. Her work, The Red Shoes, is a contemporary retelling of the Hans Christian Andersen classic for children as well as adults. She was a selected artist and featured in the American Illustration 27 Annual in 2008. Her book and artworks are also selected as a winner in Print Magazine’s 2009 Regional Design Annual Competition, and won a Gold medal in 3x3 Children’s Book Show 2009. Both Print Magazine’s 2009 Regional Design Annual and the 3x3 Illustration Annual No. 6 are due out in the Fall 2009.
From the Artist:
"A lot of people have asked me the reason why I don’t use any colors in my work. I do use colors sometimes, but I think there are a lot of colors out in the world. I don’t think I need too many colors to express my thoughts and stories. A piece of paper and a pen with black ink would be enough for me to create my own world. Instead of filling up the paper with colors, I’m inviting the viewers to my black and white world and asking them to fill up the blanks with their own colors and imagination. My obsession with Christian Anderson’s the Red Shoes story started since I was a child. I read this story in Korean when I was around 7, and I read a different version in English again as a grown-up. I felt fear after reading this story during my childhood. In contrast, I felt anger and disagreed with certain circumstances the main character of the story had to go through. In my personal series of this story, I tried to express different feelings and personal interpretation about the Red Shoes by Christian Anderson. With the project with AMMO books, we took a different direction to the story with a hopeful message for the new generation, and the story was re-written by Gloria Fowler. It certainly was a great opportunity for me as an artist to carry my little obsession of the story into a very meaningful book.

The overall mood of the artworks in this book, the Red Shoes, is slightly brighter than my earlier works. In fact, the forest scene in the book looks similar to one of my earlier works. It was one of the series that I worked on a while ago as a personal project with the same concept. This particular drawing also inspired the book project earlier in the process. But I think they still carry similar atmosphere because my recent works are also done in pen and ink on paper.

I always like to hide little details that are relevant to the story in my drawing. For example, out of about a hundred pairs of shoes in the end paper of the book, there are two pairs that were created and worn by the main character (Karen) and her mother. Some viewers also notice that I only drew the eyes of Karen, and it is done intentionally to emphasize her emotional state even more. I get very excited when people figure out these little details without my explanation." - Sun Young Yoo