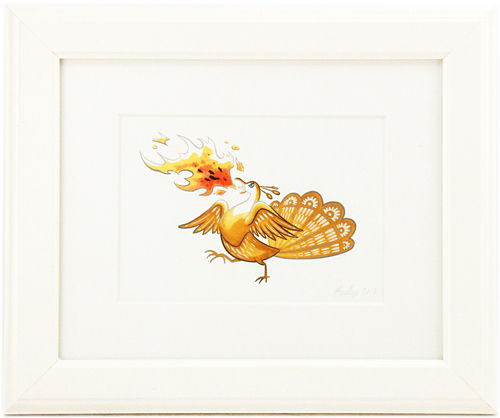 Learn more about Becky Dreistadt's year-long project showcasing 151 creatures hand-painted by the artist, accompanied with imaginative stories by her partner Frank Gibson culminating in a fantastically fun exhibit and book release.  More details
I want this as a print!

Charcalk is a much sought after ornamental creature. Superstitiously considered a symbol of power and influence, prominent clans have always wished to display such a powerful and striking beast. The creature thoroughly resists any kind of domestication and must be carefully kept to avoid injury. Charcalk’s metallic tail-feathers are used to shield itself from the attacks of other fire creatures, with which it has a combative relationship. Attempts at taming Charcalk are ill-advised.