Stories Are Never Just Stories: An Interview with Amy Ratcliffe
Nov 08, 2018    posted by: 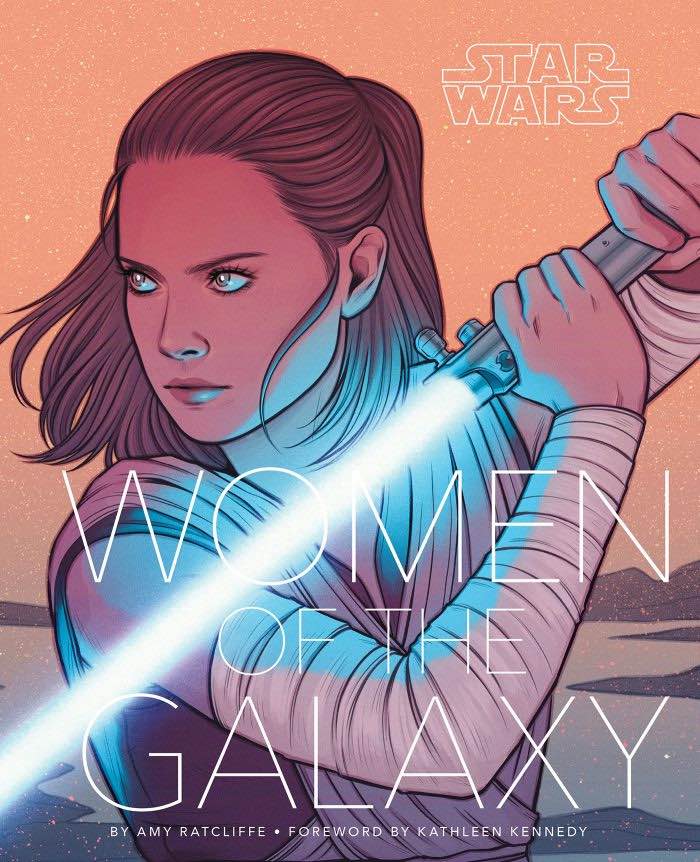 In the dedication for the new book, Star Wars: Women of the Galaxy, author Amy Ratcliffe writes three words: For Carrie Fisher. The first female lead in the Star Wars universe, Carrie Fisher’s Princess Leia is at the very heart of the story that started it all. A woman and a fighter, she demonstrated to an entire generation that those two things aren’t a contradiction.

With profiles of 75 fascinating females from Alderaan and beyond, plus brand-new illustrations by incredible female and non-binary artists, this book is evidence that the Star Wars we know and love would not be possible without the women contained in its pages. Check out our interview with Amy Ratcliffe as she speaks about her process, favorite characters, and why we need more books like this one.

As a huge Star Wars fan, what did it mean to you to write Star Wars: Women of the Galaxy?

It’s been a dream of mine to write a Star Wars book, so I'm still pinching myself over seeing my name on Women of the Galaxy. I've been passionate about seeing more representation in the galaxy far, far away, and this book highlights so many incredible characters I've admired and championed. I could not imagine a more fitting topic for my first book. 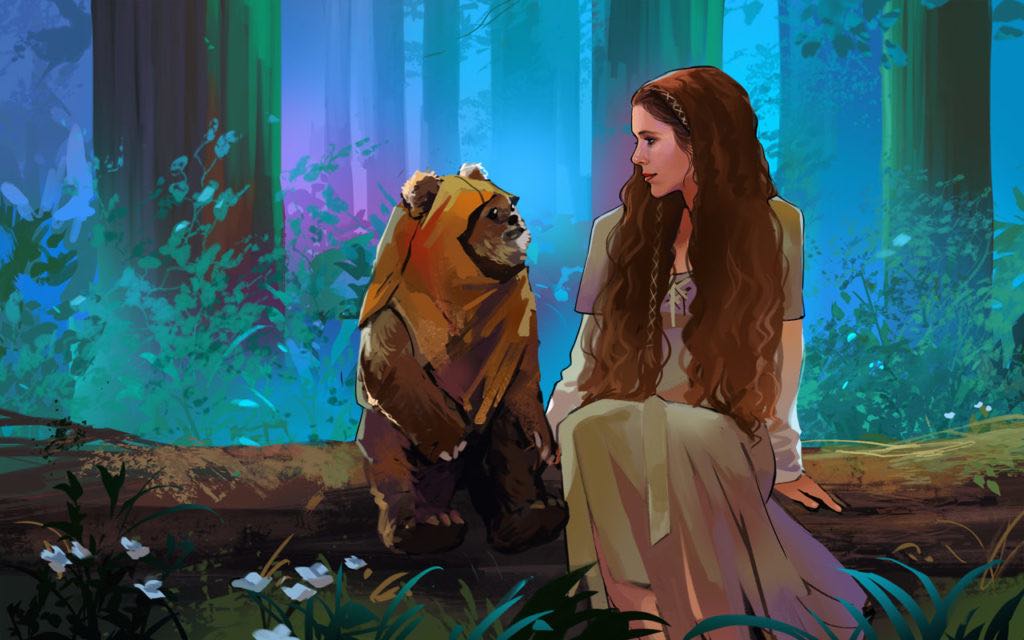 In researching the book, what surprised you the most?

Though I was familiar with most of the 75 characters featured in the book, I definitely encountered a few new faces and a lot of new details as I revisited stories during my research. For example, with Asajj Ventress, a villain from Star Wars: The Clone Wars, I had forgotten she literally kills a male character who calls her a “pretty bald babe.” Experiencing some of those moments again was such a joy. I mean, I had to spend a lot of time researching in the Star Wars universe—it was a gift. 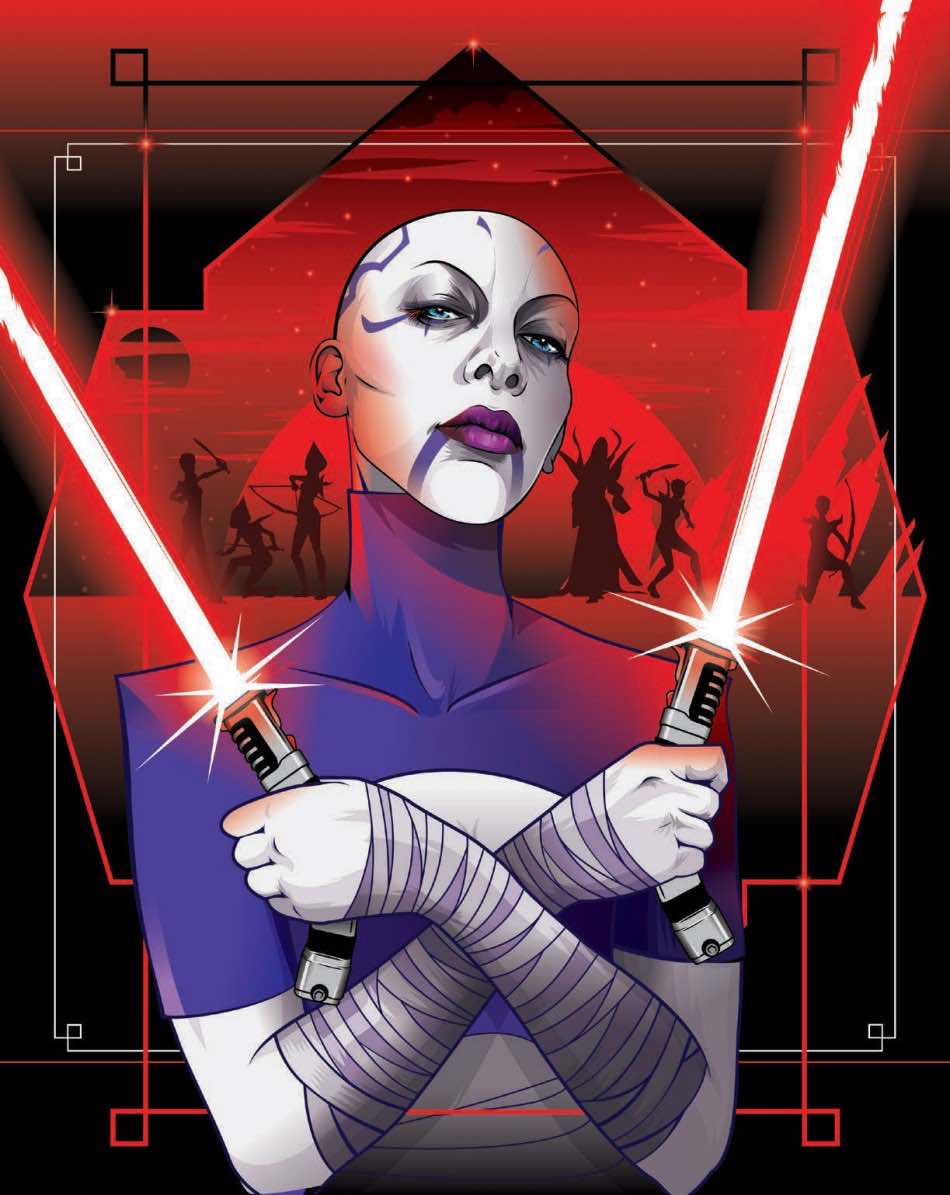 Do you have any personal favorite characters or illustrations from the book?

All the art in this book is so stunning. I can't get over how much emotion and presence the artists brought to each illustration; I feel like I can get a total read on what a character is like by gazing at the portrait. My favorite character is one hundred percent Ahsoka Tano, and because I love the Star Wars Rebel episode that she faces Darth Vader in (“Twilight of the Apprentice”), I was thrilled to see Sara Kipin's art depicting a moment during Ahsoka and Vader's duel. 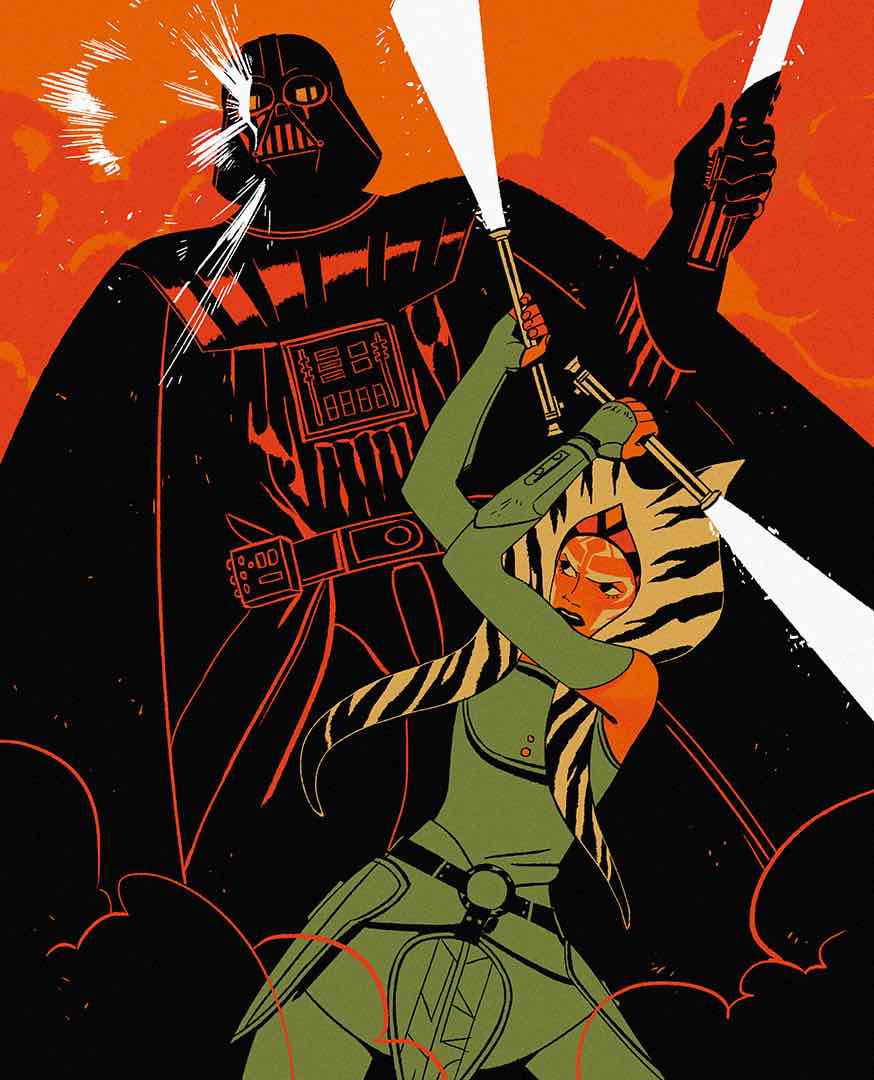 Why was it so important to be able to highlight all of these amazing female characters?

Something that really hit home for me as I was writing this book, was just how wide a variety of roles and spaces they occupy. Some are heroes and villains, sure, but others are explorers, or business owners, or bounty hunters. I hope some of the profiles in the book encourage fans to seek books or comics they haven't read before so they can learn more and find the characters that they connect with. 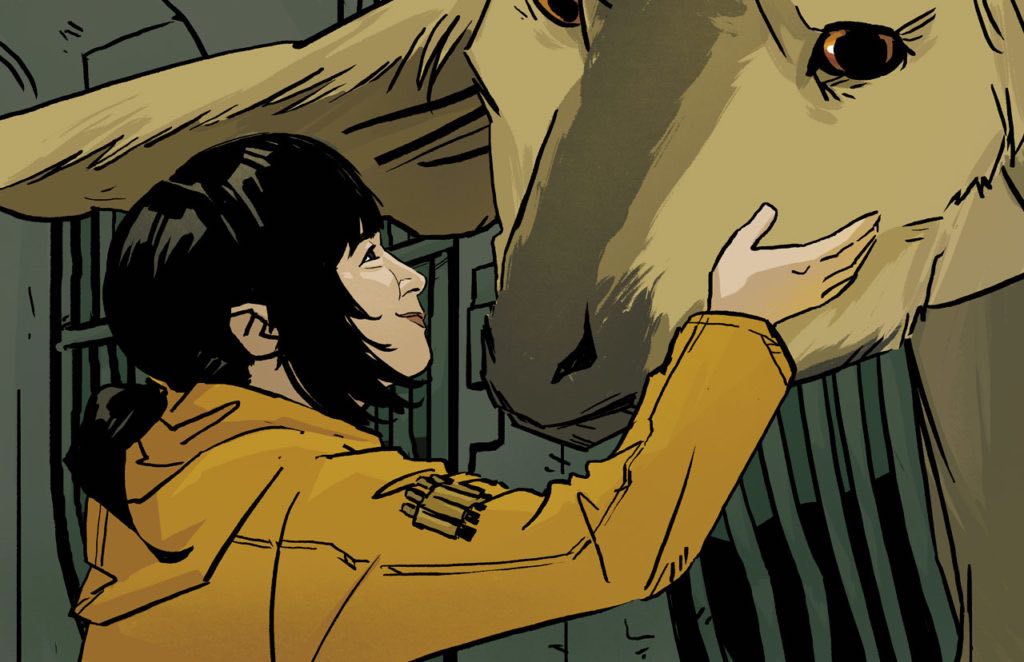 What excites you about the future of the Star Wars franchise?

I'm kind of floored by how much Star Wars we have to choose from. We have the films, obviously, with Episode IX and a new trilogy and series on the way, but also animated series and the first ever live-action Star Wars TV show. Then on top of that, all sorts of books, comics, and games are being released on a regular basis. I'm excited to see other eras explored and to see a broader view of the galaxy outside of Jedi and the Skywalkers.

A lifelong fan of Star Wars, Amy Ratcliffe has written for Star Wars Insider  and StarWars.com. She’s a host at Star Wars Celebration and cohosts the Lattes with Leia  podcast. Currently, she is a managing editor at Nerdist. Star Wars: Women of the Galaxy is her first book. Find her @amy_geek on Twitter and Instagram.

Pick up Star Wars: Women of the Galaxy now!


Gallery Nucleus is proud to celebrate Mulan with a tribute exhibition for the film’s 20th anniversary! As destiny would have it, when artist Jisoo Kim received the email asking her to be a part of the show, she was watching Mulan on Netflix. It was simply meant to be.

If you are familiar with Nucleus, you’ve probably seen Jisoo’s work before. She has lent her talents to many of our past shows, including our Incredibles 2 Tribute Exhibition, our Disney Television Animation Tribute Exhibition, and Be Our Guest: An Art Tribute To Disney's Beauty and the Beast. After a hugely successful Kickstarter campaign, she published her first collection of illustrations, Kimchicat Vol. 1. Her newest piece for Gallery Nucleus, “Ballad of Mulan”, is a beautiful homage to the film, and we are thrilled to have been able to include it in this exhibition! 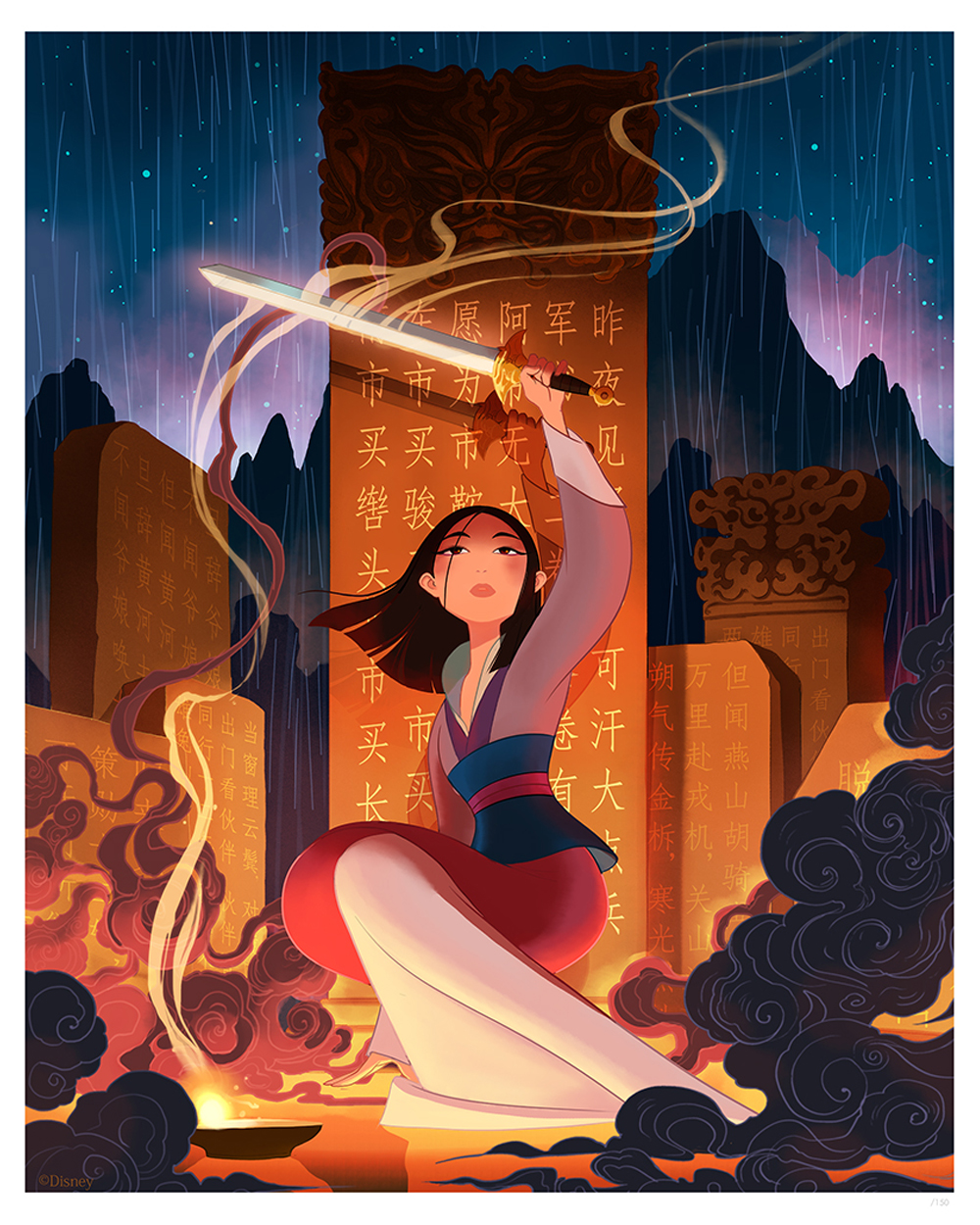 Can you talk a little bit about the inspiration behind your piece, and why you chose to depict that particular moment in Mulan's story?

There is a moment when she makes her decision to go against everything and everyone she knows. She gives a prayer to her ancestors with the hope of receiving their blessing and good fortune. To me this is the moment she was solidifying her conviction, and giving herself the courage to go on. Everyone has to make a decision like this at some point. Going against all the people you love and trust takes an immense amount of courage. Is this really the right thing to do? What if it all goes wrong, and I have nothing to show? But in the end it also gives you strength to carry on when things would be too difficult to continue.

Why do you think Mulan continues to resonate with audiences so profoundly, now twenty years after its release?

I was talking with Helen Chen and Linda Chen, both distinguished and amazing Chinese-American animation artists, about how Mulan was the Disney movie that made them want to be in animation. As it was the first Disney Animation feature to have an Asian historic story and young Asian characters like ourselves, we were able to truly put ourselves into Mulan's shoes. Those strong impressions that were made when we were young seemed to stay with us for a long time.

What, or who, have been your biggest influences on the journey to becoming an artist?

My favorite movie to this day is Whisper of the Heart, a Ghibli movie by Yoshifumi Kondo. There's a quote in the movie where the grandfather encourages the main character, "I have seen the light of the jewel inside your heart. You are wonderful. There is no need to rush. Please take your time to polish your talent.” It makes me cry every time. This beautiful quote gave me strength when I was young, and now it has an even deeper meaning: For a paper at CalArts, I wrote about the late Yoshifumi Kondo. He passed away at the young age of 47, and it was said to be because of overwork…The balance between work and life, and keeping your mental and physical health in check, is always a struggle for many artists.

Why does animation, in particular, have the ability to connect so deeply with viewers?

Stories will always draw people in whatever art form it uses, but I particularly love animation [because] the simplicity in drawing and creating everything you see on the screen has a poetic, hidden delicacy to it. Because it is a created art, it can mean so much more, and draw in so many people and have them relate much more easily.

And finally, what are you working on these days?

During the day I'm at Warner Brothers on the new Harley Quinn show. During the nights I climb, and I'm hoping to publish a book inspired by climbing soon.

Jisoo Kim lives in Los Angeles. She has studied at CalArts and Korea National University of Arts. A hugely accomplished artist and passionate about animation, Jisoo has worked for Disney, Dreamworks, and Frederator Studios. Prints of “Ballad of Mulan” are available on our website. Follow Jisoo on Instagram @jisookimcat and on Twitter @jisooK.

Stop by Gallery Nucleus through November 4th to check out our Tribute Exhibition For Mulan’s 20th Anniversary!