Fans will have a special chance to meet Jhonen Vasquez, creator of Invader Zim, at Nucleus' Comi-Con booth (#2235). He'll be signing his two latest prints, "Steakfist" and "Bolt Cougher."  Be sure to swing by and be a part of the action!

Oh, and here's a peek at the prints: 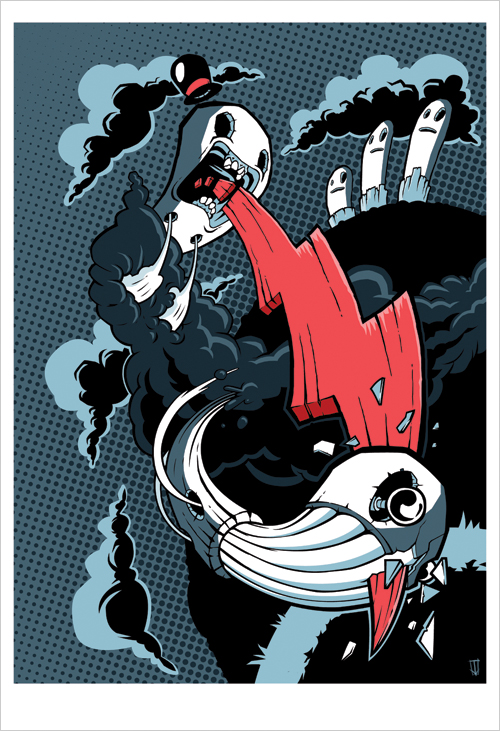 
To celebrate her upcoming Nucleus exhibit, Cinderalla, and her Comicon debut, Junko Mizuno has kindly presented us with three never before-seen COMICON-EXCLUSIVE prints! One print will be unveiled each day during Junko's artist signings (times and artist signing schedules can be found here). All prints are signed and are available for a limited time only.

Here's a sneak-peek! Join us at Comicon to see the other two prints! 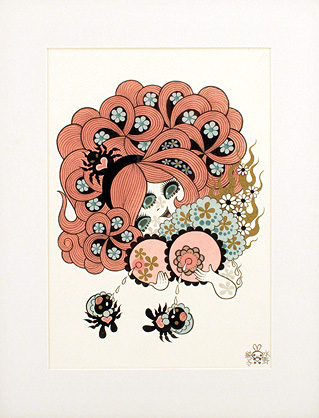 ITS that time of the year again! Where spectacular artists, comic books and nerds alike come together for the great COMIC CON! And NUCLEUS will be there along side the wonderful Flight Comics Crew!

We hope to see you there! For this is YOUR chance to check out some NEW prints by artists Chris Appelhans, Lorelay Bové, Scott C, Becky Dreistadt,Mari Inukai, Jon Klassen, Kazu Kibuishi, Junko Mizuno, and Jhonen Vasquez. Nucleus will also have special signing sessions with Becky, Junko, Jhonen, Scott, and Mari. Learn more about it all here

Here's a preview of some of the prints :) 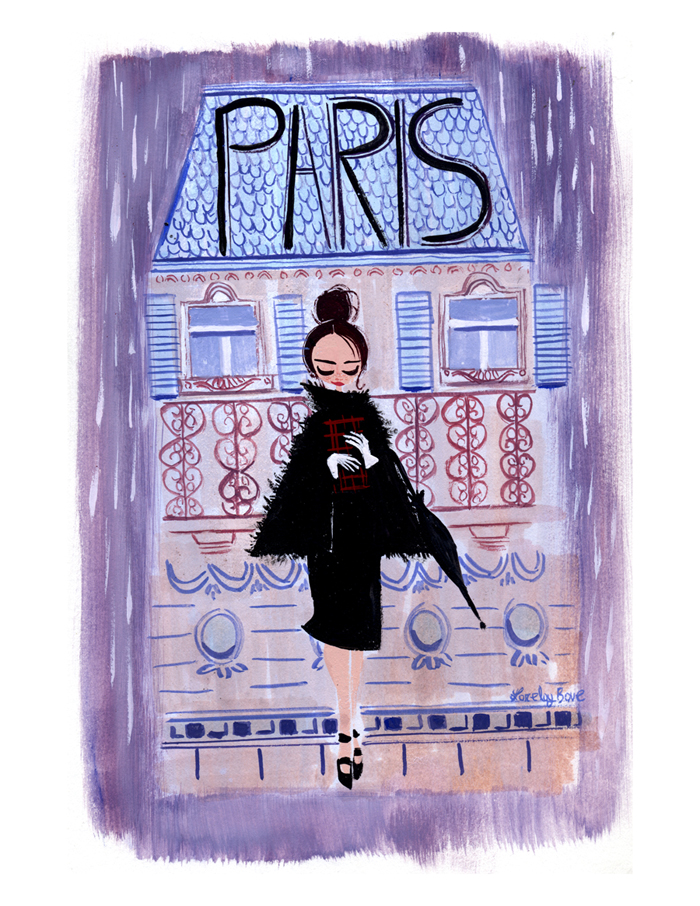 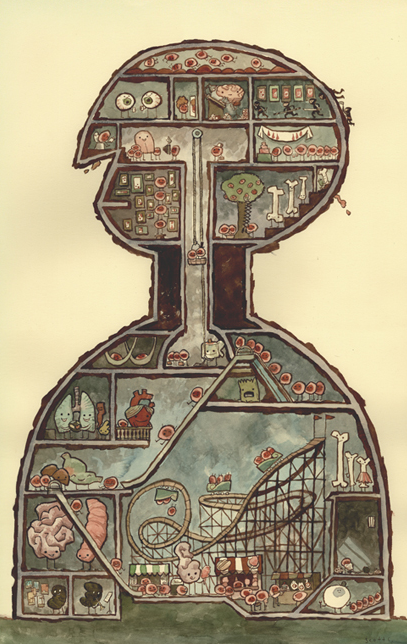 Up to the House | Jon Klassen


I first became aware of Nate Wragg’s work several years back when Ratatouille hit theatres.  Like many who saw the film, I was enraptured by the visual lushness, the colors, and rich atmosphere, all of which seemed so perfectly appropriate for a heart warming Disney tale. Since then, Nate, who had been one of the key artists for the film, has established himself through his own artistic practice, creating works not far removed from those made during his days at Pixar—the magic, the cute characters and bright colors are still very much evident, but his style evokes a nostalgic yearning for the 1950s, a kind of re-envisioning of Bauhaus illustration. This approach gives his work a sense of refinement and class, a defining element that makes Nate the artist he is.

His pieces for his Nucleus solo show, “Locals,” continues to show his growth and explorations as an illustrator, having woven his interest in nature and child-like curiosity into his work.  In a recent interview, I was fortunate enough to uncover Nate’s motivations for the show, his recent endeavors, and what this show signals for his upcoming work.  Without further ado, here's Nate on "Locals"...

N:What was the overarching theme for this show? What did you hope to communicate?

NW: With the show I was trying to explore the things and characters I saw and spent time with when I was a kid.  Children have a fun way of looking at the world, often seeing interesting things in the most normal of places.  I was trying to tap into that adolescent way of imagining things.  I hoped that the work got people thinking and remembering the things they used to imagine as kids.  I wanted the paintings to take people back to that fun time, to allow them to re-explore their imagination again.

NW: I guess a simple way of putting it would be imaginary friends, but in large part, I would say the inspiration for most of the creatures and characters in the show came from nature and the idea that spirits in nature often take the form of things we see everyday.  I'll use Local Upper, as an example.  When I think of a really happy moment, or a symbol of pure happiness, a rainbow comes to mind.  So for me, of course the happiest guy in the world would be a big rainbow character, skipping around and over the mountains where he lives.  It was those symbols in nature that both inspired me and really became the backbone to the look and feel of the characters.

N: Was there a particular reason you used wood as base material as opposed to paper or canvas?

NW: You know, working on wood was a new thing for me.  I really loved the naturalistic look and texture of wood.  I thought this would be a fun way to not only be inspired by nature, but to literally build off of it.  So I created my first piece, "Local Poet and his One Man Band," on a slab piece of a tree trunk. I really found myself happy with the look and never looked back.  Working on the wood also really inspired the idea of making the large piece, "Sasquatch Summer," out of cut wood pieces.  I thought it would be cool to really push the limits of what I was used to with painting and collage on wood, and make something that I felt would really set the tone for the show.

N: How has working in animation influenced the way you perceive and understand art?

NW: I think working in animation has really established a sense of storytelling in all of my work.  I love telling stories with art, and so I think that constant sense of story which really drives the medium of animation, always seems to find it's way into the way I think about and create art.

N: Was this show indicative of what you hope to pursue next?

NW: Yes and no.  Originally I had envisioned creating a show with a bit more of a melodramatic feel to it, but this show became anything but that.  Ultimately, this was good because i couldn’t be happier with the way it turned out, but I think for my next go around, I'd like to continue to explore collaging natural materials with the added sense of drama. I want something still fun and charming, but just a bit more mellow.

N: Can you describe the process you went through to put together the art pieces for the show?

NW: First off, I thought long and hard and looked deep into my imagination, trying to remember the characters and spirits I had imagined as a kid.  I didn’t spend too much time sketching and designing each piece before I painted and collaged them.  I usually doodled and did some small thumbnails and the just went for it once I had the idea in my head.  I really enjoy the spontaneity of working with collage and paint because each piece ends up constructing itself a little different than the last, so really, the only formula you can rely on is trying to embrace the spontaneous nature of flipping though magazines, looking for the right colors and textures to use.  If I couldn’t find the right color or texture from a magazine, I then resorted to either painting acrylic on watercolor paper and cutting it out, or using colored paper I had lying around.  In the end, each piece is different but has a similar sense of energy to them.  Some have more collage elements than others, but over all I wanted those collage elements to really bring the characters and the paintings off of the wood canvas.  I wanted the characters to feel like they were literally stepping off the piece to be seen.

N: What are 3-5 art related things that currently interest you?

NW: Toy making has been something I've really found myself interested with.  "Frostbite" from the show is the first toy I've made, and had so much fun with it.  I'm currently planning the next one I want to create.  Maybe it will be another character from the show?  Who knows.

My experimentation with the woodworking I did on the big piece for the show, "Sasquatch Summer," has gotten me interested in doing more large scale wood working pieces

I've been chatting with a friend of mine who does art for skateboards and ever since we began chatting about it, I’ve been wanting to break into designing some art for skatedecks.  As a kid, when I would go into a skate shop, I used to love looking at the art on the bottom of the decks, so I think it would be really cool to pursue that venue for creating art.