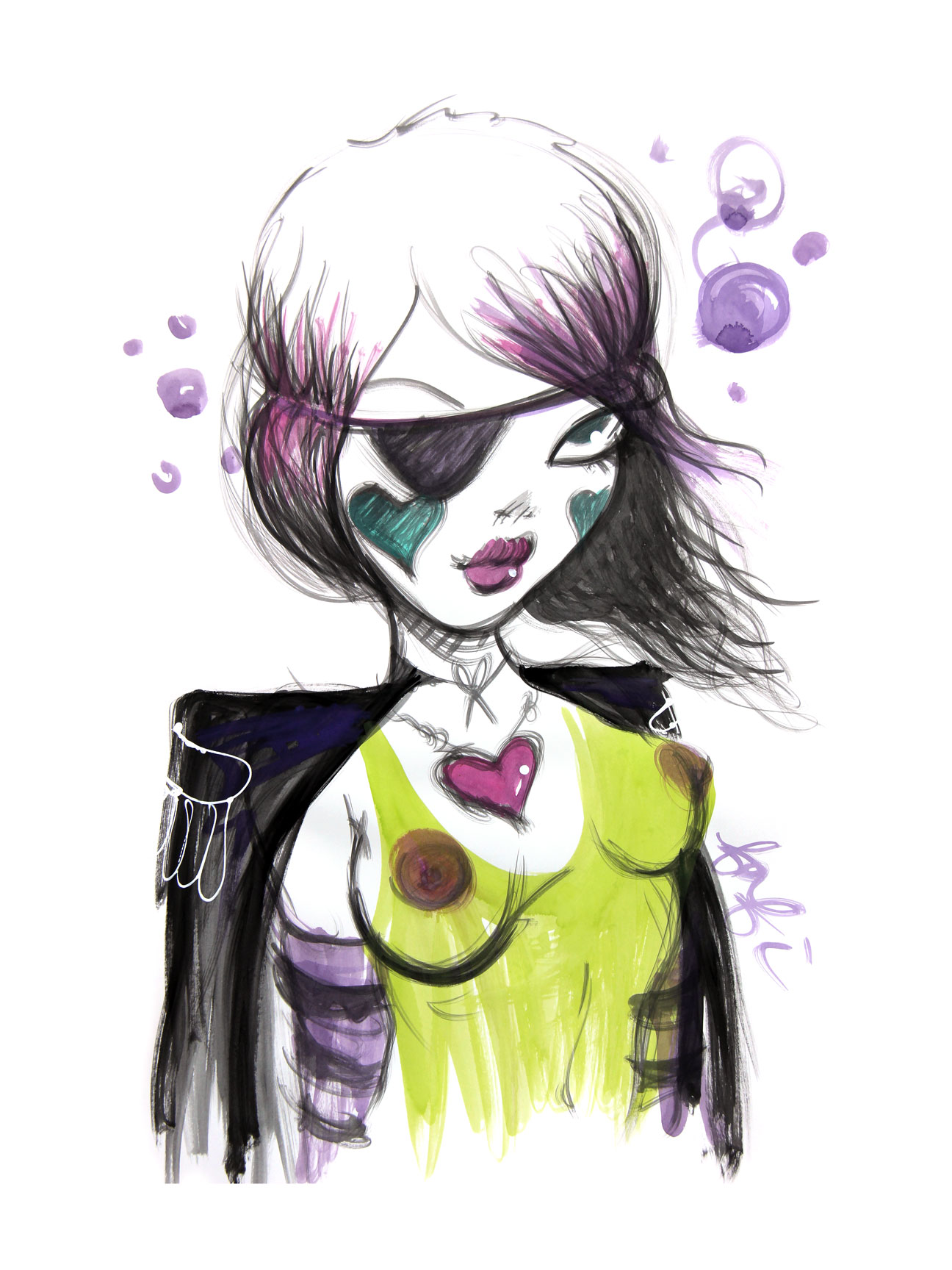 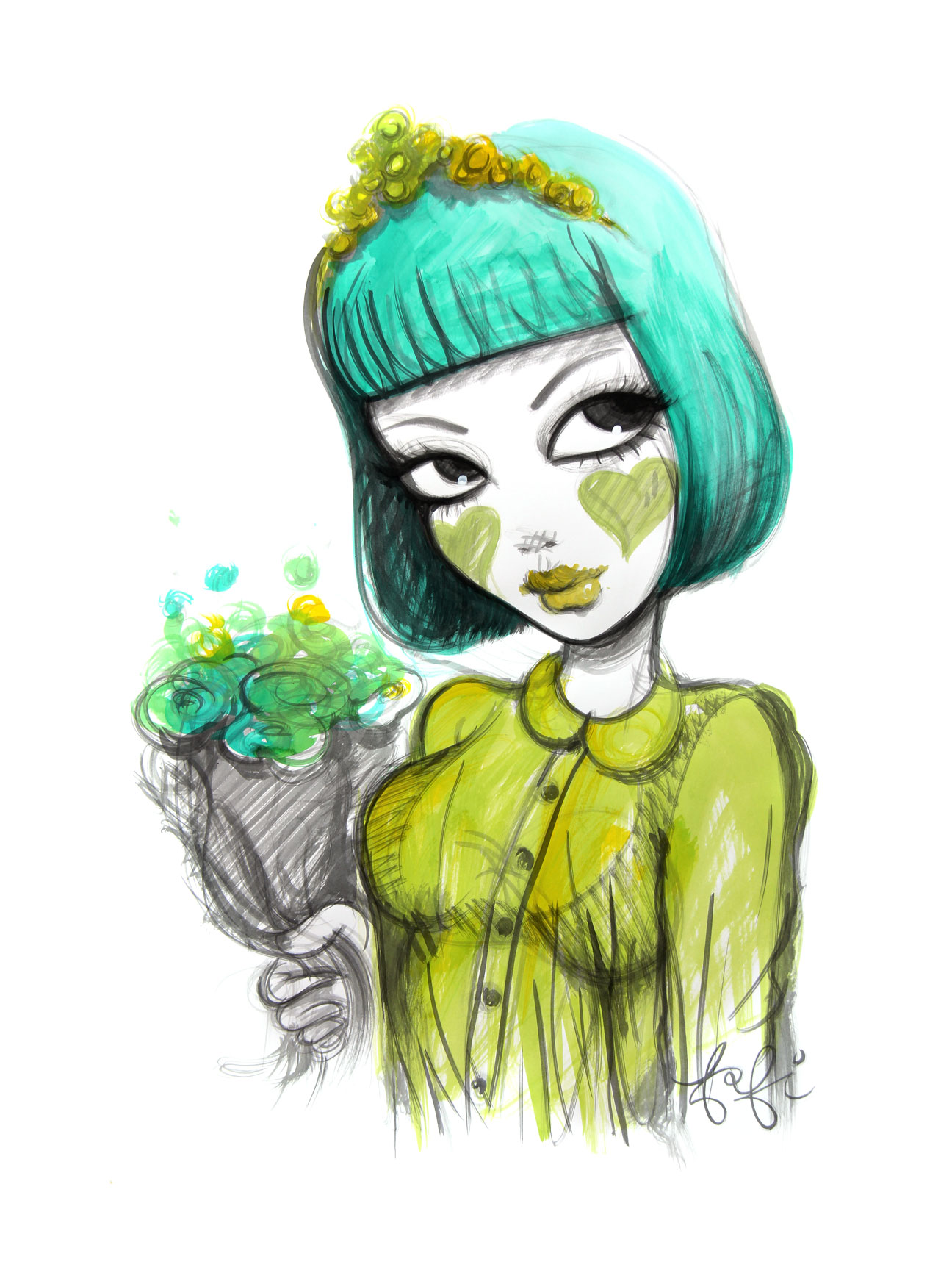 We're extremely excited to announce our latest collaboration with the acclaimed Fafi! Nucleus will be releasing FOUR new prints based off of Fafi's illustrations created on the day of her "Carmine Vault" book signing back in April, each signed and numbered by Fafi herself. These are limited edition prints. Only ten of each will ever be made! We'll be releasing them in a few weeks so be sure to keep your eyes peeled. You won't want to miss out!


Joshua Harker, 3D sculptor has deservedly earned himself collectors among the likes of Ron English, Shepard Fairey, Frank Kozik, and Mark Ryden with his strategically elaborate sculptures. Nucleus is proud to feature Joshua in our upcoming Hollow Thoughts exhibition and we were thrilled to learn he was willing to answer a few pressing questions from us! Read on:

I noticed you create all types of sculptures, but you have dedicated a good amount of your craft to what you label "forensic art." What is it about skulls that appeals to you?

While I've done a fair amount of forensic facial reconstructions I don't particularly consider them art.  It's more of a study or skill.  If they're done right , there's not much room for interpretation. It's all very by the book.  Once you start taking artistic license there is no foundation for an accurate likeness.  I'm doing much less of that kind of work these days.  Regardless, I got interested in forensic "art" particularly because of my fascination with the skull & anatomy as well as some history I have doing figurative & portrait sculpture.  I figured if heads were to be a common theme in my work I should know the anatomy of the head as intimately as possible.  So I've gotten pretty good at sculpting & drawing skulls in the process.  What's cool is that more than anything else (other than trauma or disease) the skull is the single most definitive influence on what we look like.  It is the architecture of our faces.  On a more psychological level, there is a quality in the image of a skull that speaks to us about our mortality.  It is as much a symbol of death as it of living in the now.  That image & reflection is profound & timeless.

Can you tell us about the process and methodology behind your detailed skulls?

Stemming from 2D linear automatism explorations (pioneered by André Masson and practiced notably by Joan Miró, André Breton, Salvador Dalí, Jean Arp, and Pablo Picasso), my “Tangle” series are intended to interpret and share forms evident in the mind’s eye but that cannot otherwise be described. My intent is to explore and give form to the architecture of the imagination. By disengaging the conscious mind I am able to examine esoteric visions before they submit to a recognizable metaphor. I am then able to capture and refine them into the forms I command offering the opportunity to study their identity and structure.  Viewers are invited to exercise their own translation of my work in much the same way a Rorschach inkblot elicits various interpretations. The forms and images become uniquely personal to the viewer through this psychological dialogue.  Recently I have begun to apply this practice to representative forms (skulls).  The linear pattern work is an exploration of the 3 dimensional surface.  It gives a new identity to the shape & invites the viewer to discover the form through the gentle visual lead of the pattern. 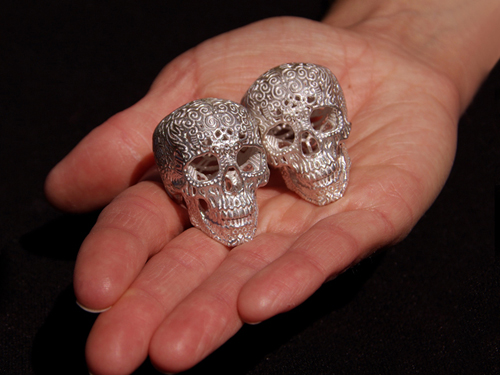 How did you come about combining 3D technologies to materialize your sculptures?

The medium really chose me more in that there are really no other ways to make most of what I do.  The necessary processes and technologies I use to create my art have only become available in a suitable manifestation within the last 5 years. A perfect storm of new software, advances in 3D printing technology, and material engineering opened the doors for me to bring my visions into reality. I had worked directly with all these components over the last many years testing and and applying it to my art waiting for it to mature into a usable medium. My work became all about rethinking how to build what I wanted because there were no traditional techniques to achieve it. 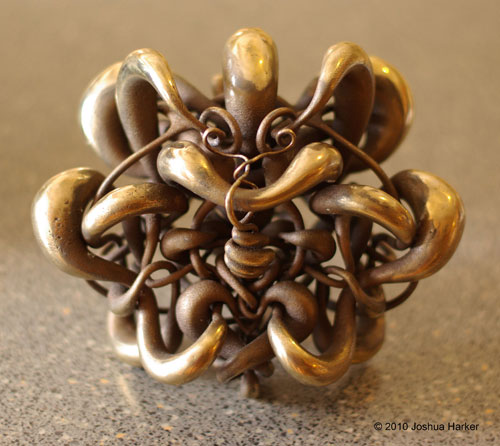 What material are your skulls are made of? Did it take some experimenting before you found a medium that was suitable for such fine details?

Most of my digital sculptures are 3D printed in Polyamide (nylon is a famous polyamide) using a process called Selective Laser Sintering (SLS). Before everything matured to a point where I could viably use 3d printing as a medium I had tried many other ways (clay, stone, wood, wax, etc) without the results I was looking for.  I have worked with many 3d printing machines in the past & have even owned a few of my own at one time so I'm very familiar with the abilities & limitations of the options within the various technologies.  The process I typically use does not require any support structures during the build process so I do not have any extraneous features that need to be removed afterwards.  The raw material is a very fine powder that is fused together with a laser.  The unfused powder acts as the support material during the process and is simply brushed & blown away after completion.  With most of my pieces it is a practical impossibility to make them any other way. 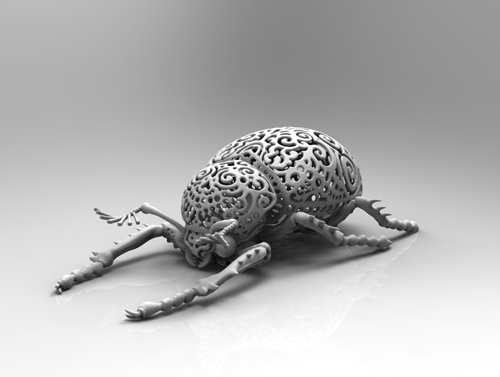 You mentioned KISS was an early inspiration for you. Are they still? What inspires you now to create such elaborate work?

I know it sounds funny but I seriously consider their "look" influential in my work.  I exhaustively studied the way the makeup followed the shapes of their faces in attempt to discover what they looked like without it.  This fascination grew to further include traditional Maori, Celtic, Polynesian, & Victorian art & patterns particularly when applied over 3 dimensional shapes as well as natural dividing and winding formations (roots, vines, neural networks, cardiovascular systems, lightning, fracture patterns, etc).  I'd say that seed of fascination still grows in me & still inspires me.  I love the aspect of how 2D images & designs can change the interpretation of 3D geometry.

Do you have any major projects in the works you can share with us?

Working on a new Kickstarter campaign honoring the 3rd Industrial Revolution.  Doing collaborations with artists EMEK, Joe Fenton, & Robert Connnett. Working on multiple new "Filgre" series including entomology, ornithology, ichthyology, herpetology, & human figurative.  I've also got a comic book (or is it graphic novel?) that I'm considering putting out.  Never been a hardcore comic guy but I've got a character & story that should be presented in that medium. We'll see, I'm a busy guy these days.

Lastly, just a question for fun... which do you prefer? pancakes or waffles?

All above images ©2012 Joshua Harker.


Noah Scalin, dedicated creator of the adored skull-a-day site joins us in our upcoming skull-themed exhibition, Hollow Thoughts. He kindly shares with us his recently completed project "100 Painted Skulls," an assortment of 100 unique skulls grouped together into one impactful masterpiece. Can you guess which of these skulls Noah contributed to Hollow Thoughts? Stay tuned to find out! 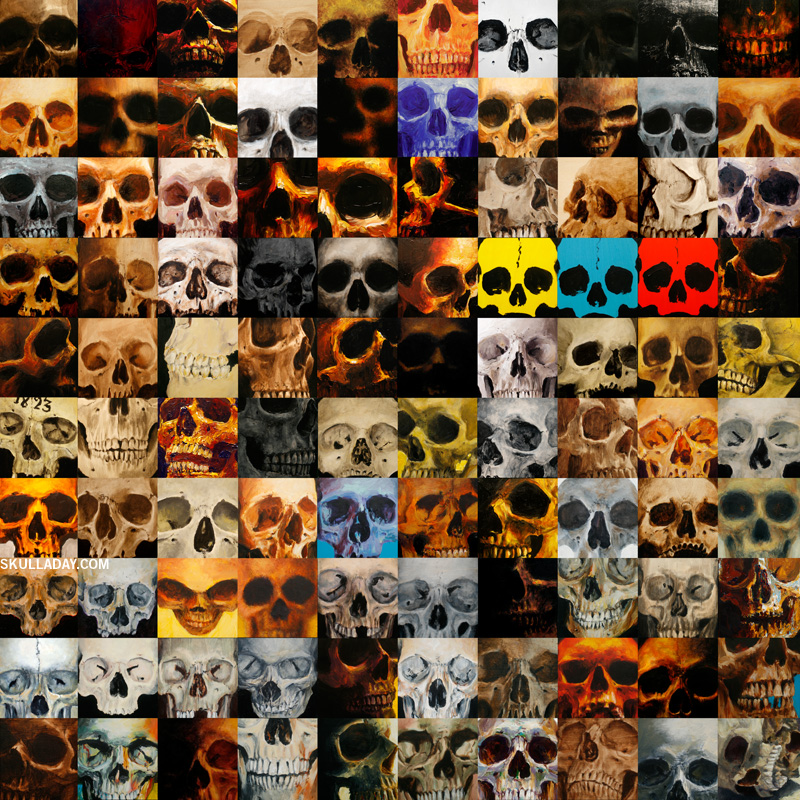 Follow him for more of his daily tributes to skulls on skull-a-day, a collection of rare skull finds, submissions, and creations by Noah Scalin himself.


Join us for the opening of Hollow Thoughts this Saturday June 9, 7-10PM and also check out our joint solo exhibition in our main gallery with Jeremy Enecio and Cam De Leon. Free refreshments, snacks, and admission!